PROFILE -  D. LATOUR & Fils was a French maker and retailer of survey materiel. The plants were located in Ligny-en-Barrois (Département Meuse). Many items like compasses were supplied by HOULLIOT. LATOUR offered also survey compass types like the famous Peigné and Rossignol instruments.

PROFILE - Unknown manufacturer. A similar design appears on a disc that could be a medal or a compass dial (link to image courtesy B. Sutton) - the rest of which is lost - and which was maybe partly coated with a thick layer of paint or enamel. This picture symbolises the extension of the United States in all directions contrary to the North vs. South division of the cessation war.

Historical note: This compass is on permanent exhibit at the Ford’s Theater Museum in Washington D.C. It is one of the items which belonged to President Abraham Lincoln's murderer, John Wilkes Booth. The latter tried to escape after he had killed Lincoln on April 14, 1865 at Ford’s Theater. Despite using a compass, the conspirators John Wilkes Booth and David Herold lost their way while attempting to cross the Potomac River on the night of April 20th and landed in Maryland instead of Virginia. They tried again two days later but in the meantime, more Federal troops were hunting them. On April 25 they were surrounded. Herold surrendered and was sentenced to death. John Wilkes Booth was shot during the fight.
Photographer: Carol M. Highsmith - Postediting: Jaypee (see original picture "Booth's possession").

PROFILE - Swiss clockmaker located in Saint Imier. He made Mark VI pocket compasses for the U.S.A. and Great Britain during WWI. At that time,  WITTNAUER was their agent in the U.S.A. Another compass was produced in the 1940's after the Longines WITTNAUER Watch Company (LWWW Co.) was created in 1936.

Long necks are antique pocket compasses whose loop attachment fitting is somewhat longer than on most other (later) compasses.
They were produced in the second half on the 19th. century, maybe earlier. Most of them feature a bar needle and an enamel display (see SIMMS, SPEAR). Extremely rare are the ones featuring a floating compass card (e.g. NO NAME, GB).

The example below features a tortoise shell back. It is unsigned, however the fleur-de-lys' shape is identical to that featured on the compass signed J. & G. SIMMS.
The transit lock is a plunger type, it goes in and out, rather than side to side. This feature was used only up until around 1790, it is not unique, but is limited only to the very oldest long-neck compasses. It is rare for that feature, but is also unique that it is made in tortoiseshell, solid gold, and gold plated silver. There appears to be no brass. 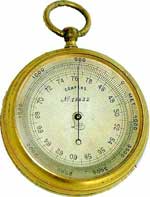 PROFILE - German company located near Stuttgart (for more information click HERE)
Apparently, LUFFT only manufacturated the BÉZARD compass. A car compass and a diver's wrist compass with identical features are also known.
All other items were produced either by BUSCH, STOCKERT or by the French manufacturer HOULLIOT.
They were called Schülerkompass (school boy's compass), Wanderkompass (hiking compass), Marschkompass (marching compass) etc. They are displayed here together since their simple cylindrical form constitutes one category. The product range goes from simple compasses (no. 330) to precise models for military use or ambitious hikers. The latters featured a rotating course setting arrrow. There were several technical solutions: some were directly fitted under the crystal (no. 745 and 1745) and could be set by turning the crystal frame rim. On others, this arrow was on the rotating capsule floor under the magnetic needle (no. 2745). This system and most other models were manufactured by HOULLIOT. No. 2745 was called in France by MORIN Boussole directrice (see user instr. below). They featured civil divisions (360 degrees) or military divisions (6400 mils). Some had also radium paint markings for night missions.

Profile - Unknown abbreviation engraved on back. This Mark VI compass model appears in a 1926 Barker catalogue.

The catalogue for the year 1930 gives a perfect overview of its product range. MORIN specialized in the field of high precision measuring instruments but offered also a large variety of widely used smaller compasses.
The most well known were the so called boussoles directrices (Marching compasses) used during WW I. The various items are shown together with the catalogue illustration. 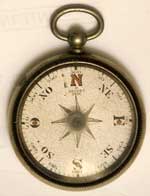 PROFILE - Former Swiss manufacturer located in Bienne (Biel in German) and Geneva and founder of RECTA in 1897 (no more data momentarily available). Eric Vaucher was the engineer who designed the famous match-box-shaped RECTA DP compass type. We presume that the floating dial compass at right (resembling the item no. 1 in the catalogue) was created by this company. The words Brevet DEM = abbrev. for demandé in French, meaning 'patent pending' refers to the patent no. 71,708 describing a wrist compass (follow the link).

Picture at right: this model featuring a floating card existed also with a standard needle (follow the link for a picture).


Back to ALPHABETICAL SEARCH (Pocket compasses)

PROFILE - Former British Company (for more information click HERE)
N & Z built large instruments for ships but also small instruments, any of them were in reality manufactured by F. BARKER and Son.
See a small N&Z compass integrated in a photographer's instrument made by A. Watkins.

Technical Data
The compass is housed in a small, 1.75 inch (45mm) diameter brass hunter case which was originally ebonised; much of this has worn away with age and use but the inside remains original. There is a hanging loop and a working push-button catch. Inside the case there is a nickel plated ring or frame, with milled edge, which slides upwards allowing the compass to swing in its gimbals and releasing the card to search for North. The actual compass is tiny, 1 inch (25mm) in diameter, with a black & silvered card marked Negretti & Zambra London. It consistently sets North. The compass weighs 100 grams, depth closed: 17 mm.
This particular design is called SINGER after its inventor: i.e. the card's northern half is blackened to render readings in the dark easier.
For comprehensive explanations, see also THE COMPASS COLLECTOR's website (LINKS).

PROFILE -  V. Ossietzky was colonel in the Russian Army. This compass bears on the under side his signature written in the pre-revolution alphabet. The abbreviations Oxp. Cвид. (in full words: Оxpанное Свидетельство) stand for "Registered Trademark". Compare to general-major Khlynovsky's compass and the Russian compasses further below (see also the ADBER compass).

Instrument patented by JOANNOT (link to more details in the Watches section) in 1892. The compass face features a map of the United Kingdom. The other side is the pedometer counter. Several versions are known to have been produced. 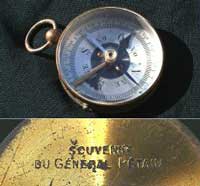 This compass is almost identical to the famous boussole directrice but smaller (Ø 46 mm). It was produced by HOULLIOT shortly after WW1. The engraving on the rear face is a recollection to the hero the Verdun battle. Pétain was made marshal in 1918 and he became the head of France when the country was occupied by nazi Germany during WW2. This model was exported to the USA (see in the shop the item featuring English cardinals) and to Germany (s. above LUFFT no. 2745).

PROFILE - PLATIN was possibly the name of a private manufacturer that became the "people's company" VEB Plastverarbeitung in communist East-Germany. Probably early 1950's.

You will find HERE a comprehensive description of what you need to know about the radioactive paint used in compasses.

In the lists of materiels* officially accepted for use in the former Russian Imperial Army (for the years 1907 - 1911) various compass models for officers and lower rank soldiers are described. The document shown at right (click on the image for a view of the complete list) comprises nine models (for full description follow the links): 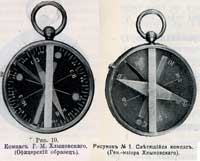 
Back to ALPHABETICAL SEARCH (Pocket compasses)