NOTE
The fashion consisting of wearing jewellery comprising a tiny compass started at some moment in the mid 19th Century. The reason for this is unknown but we can imagine that the general enthusiasm about the expeditions, in Africa, to the North and South poles, discoveries overseas together with the exotic aspects of the colonies or the British Commonwealth can have played a role.
We discovered a document pretentiously called "patent" and filed in 1856 by the French jeweller Edme POPARD by virtue of which, he alone was entitled to sell any fashion article like tobacco box, walking stick grip, purse, jewelry etc. comprising a sundial with compass (follow name link for all details).

Most items on this page contain a tiny insert compass. One of the most important manufacturer in the 19th and early 20th century was the French maker HOULLIOT. We have copies of numerous documents like lists of clients in the whole world, a price list dated 1883 and a bill form of a manufacturer of fashion compasses (1890s). The table below disolays most of the items in the price list. Some of them are transparent (see-through, called "deux glaces" i.e. 'two glasses' in the list) like the one with a ship's anchor-shaped needle and other featured a thermometer in the other side (pic. at r., click on image for view of both sides).
Go to the museum's shop for more details.

Pendant shaped like a German Students' Bierzipfel
A Bierzipfel (beer stripe) is usually made of linen in the colours of the students' association (Burschenschaft). The ends are made of silver or in rare cases of gold and a motto or a ed. In traditional students associations of some universities (mainly medecine and law) younger members (Fuchs, fox) need a leader (Bursche, ). This relationship being in reality a sort of master/slave relationship. The Bierzipfel is offered to an older student and rarely refused. This offering represents a proof of friendship. The elder student acts as a guide in the association and this relationship continues sometimes during the professional carrer. The relationship is acted during an official meeting (Convent) and in some cases the leader (called from then on Biervater, beer father) gives to his Fuchs (Biersohn, beer son) a Weinzipfel (wine stripe).
Bierzipfel exist in four different sizes. 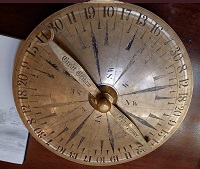 Capstan-shaped silver charm. A piece of rope is wound around the capstan. It is flanked by two elements looking like belaying pins. Logically, they should represent the bars used to rotate the capstan. The transverse boom (T-bar) was the attachment device for a pocket watch chain in a button hole.

Antique gold compass with a bloodstone, a rare Victorian item. It opens to a compass/centigrade thermometer and a photo locket.
It features flower chasing on one side and a bloodstone disc on the other side. A walking gold lion is attached at the top.

The Mickey Mouse (in German: Micky Maus) booklet no. 25, dated June1992, comprises a chapter about survival training - especially the use of the compass (Kompassgebrauch).

AIRCRAFT
Toy bought in Bulgaria, maybe also built there.  The compass is not an instrument.  Its card's high-speed rotation is proportional to the wheels' rotation on the ground and the two tiny balls running on the card sound like the turbine noise of the engine!

Compass in a Finger Ring and Wrist compass

This tiny compass was sold 15 cts as a reward for consumers of breakfast food boxes in the 1930s and '40s. The companies COCOMALT, Smith Bros. Black Cough Drops and NABISCO Shredded Wheat sent the ring together with a postcard. The compass itself was probably produced by the still existing company HIS NIBS. After WWII, a Japan-made wrist compass (below) was sold for 50¢.


OBJECTS FOR EVERYDAY USE

(see also in the category SUNDIALS our opera glass with sundial)

Picture on the lid: the compass fills the whole body of a sitting frog holding three tobacco leaves on its left arm and three other unidentified leaves on its right arm. Note: in fact, they look like the rose leaves on the box' underside, which would match the product's designation: "ROSE LEAF Chewing tobacco". The frog's hands are on both sides of its mouth.
Near its right foot are two mushrooms (a big one and a small one).
In the background, a two-masted sailboat (schooner or ketch) with the letter "L" (for the tobacco manufacturer's name LORILLARD) on its aft main sail is sailing towards the box' upper left corner on the ocean's horizon line and a sun (with eyes and eyebrows) is setting behind the horizon in the upper right corner.
Two flowering plants (probably stylised tobacco) are standing at the lid's left border line: a tall one with five leaves and a short one with only three leaves.

Definition (for more technical details, see WIKIPEDIA)
A galvanometer is an instrument designed for detecting and measuring electric currents. It is an analog transducer that produces a rotary deflection of some type of pointer in response to electric current flowing through its coil.
Early galvanometers consisted of a wooden compass capsule, a simple coil made of insulated copper wire and two cable terminals. The coil wire was wrapped like a box around the magnetic needle's axis (passing through four holes, see pictures below). Each wire end was connected to one of the brass terminals basis. To measure a circuit's current, one connected two sections of it to each terminal by means of measuring wire sections.


Pictures above left: Early galvanometer manufactured by a German company called J.O.Z. Its logo was a bearded man with a soft cap holding in his right hand a lance-shaped object (lightning?) and a big ring in his left hand (Germany, late 19th c.).

History
The deflection of a magnetic compass needle by current in a wire was first described by the Danish physicist Hans Christian Ørsted (Oersted) in 1820. The phenomenon was studied both for its own sake and as a means of measuring electrical current. The earliest galvanometer was reported by Johann Schweigger at the University of Halle (Germany) on 16 September 1820. André-Marie Ampère also contributed to its development. Early designs increased the effect of the magnetic field due to the current by using multiple turns of wire; the instruments were at first called 'multipliers' due to this common design feature. The term 'galvanometer', in common use by 1836, was derived from the surname of Italian electricity researcher Luigi Galvani. Originally the instruments relied on the Earth's magnetic field to provide the restoring force for the compass needle; these were called 'tangent' galvanometers and had to be oriented before use.
(See also the French website boussoles des tangentes).


The instrument below was patented in 1893 by Alexandre WEBER and the Swiss company Fabrique d'Ebauches de Sonceboz (FES, created in 1849) which supplied compass cases for many manufacturers. In fact, it is a small dip-needle (inclination) compass but it can be used in any position to detect magnetic fields in electrical devices like live lines.

The instrument called Acqua Magnetic Locator (link: description) is a device used for locating underground utilities designed as an improvement of dipping needles.

1 - Jules Decoudun (1843-?) was a French engineer, photographer and inventor who lived in the late 19th c. He invented among other systems this device which he called boussole du photographe pour excursions. It was used to determine the sun's height and hence the resulting luminosity. The description (below right) explains the example shown on the drawing (center): orientating the compass with the attachment ring pointing to the subject/landscape, the latter will face the sun at 6 p.m. while he/it will be receiving light from the side in the early afternoon.
2 - A. Berry was an optician in Turin (Italy). We don't know whether he invented this instrument or only was a retailer.
3 - Houlliot (France), unknown UK mfr.
4 - A. Watkins: expose meter and Bee-meter
5 - Plaubel & Co.
6 - Graff: Light angle indicator (Lichtwinkelanzeiger)
7 - Pathé Solar (Continsouza)
8 - Orient Compass