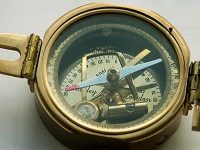 Maybe the most common fake compasses are imitations of the Brunton Pocket Transit compass. These items feature fancy engravings like famous makers' names together with unrealistic dates (the patent was filed in 1894!) and also sometimes a tiny arrow head symbol of the British Army but not the genuine one (also called 'crow-foot'). They are all made of brass (and not aluminium like the genuine ones) manufactured in India or Pakistan and cannot be used for precise work as a comparison of the magnetic needles of the military version M2 and a Stanley London model will easily prove. Some bear on the lid a table of the NATURAL SINES.
The genuine versions were produced by Ainsworth, Dietzgen or Keuffel & Esser. The modern ones produced by a Chinese manufacturer though (see Harbin DQL-8) are true surveying instruments.
One well-known model produced in large quantities was sold by a retailer specialized on false replicas called STANLEY LONDON who has no connection to the former famous maker of this name. The signature was engraved inside the capsule (pic. at r.).
We assume that the forgers risk legal issues since the compasses bear famous manufacturers' names like CASELLA or RYLAND & Son Ltd., a famous British maker of telescopes and sextants.

Very poor reproduction currently made in India of the famous prismatic marching compass Mark III (MKIII) produced among many others by this manufacturer (compare with T.G. Co. Ltd. London's original instrument). The year number punched on the rear face (1941) has no significance at all.

Some details:
- The bracket designed to protect the glass window was made to look older by artificial means and is covered with a glossy varnish.
- The side screw (marching course or bearing setting) is not made of a single element but consists of a threaded rod and a nut.
- There are absolutely no luminous devices or markings on the card or the case. The compass card is not made of mother of pearl and doesn't reflect light.
- The British Army's crowfoot-shaped arrow has not the official form, even if one considers, that the maker has wanted to represent two arrows punched opposite to each other as it was the rule when materiel was decommissioned. But then, the arrows would face each other and would build a 6-branched star.
- The abbreviated manufacturer's name is written without dots on some items.
- The capsule contains no liquid and is not designed for this purpose.
- The bezel has no securing ring and falls off when turned upside down.
- The sighting window in the lid is also unsecured (glued) and falls easily off (see pict. below). 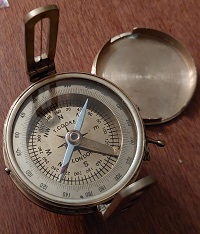 This object is a coarse modern imitation of the survey compasses made by Thomas COOKE & Sons in the early 20th c. (read the relevant entry). The genuine instruments featured a sturdy bar-shaped needle and not a flat needle.

DISCLAIMER - Some objects or documents in this museum are witnesses and parts of Germany's History. We have decided in favour of an uncensored exhibition. 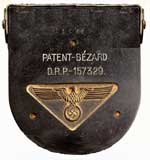 We frequently receive questions concerning compasses with symbols of nationa-socialist (nazi) Germany, typically an eagle and the cross called svaztika.

On some items, the eagle has fancy feathers and doesn't resemble the official Third Reich's heraldic eagle. On this Bézard-type compass (image at left), the eagle has no feet contrary to all official designs (see also example at right). However, the head turned to the left is ok. Animals on coat of arms always look to their right except when placed on the right-hand side of vehicles (to avoid depicting them looking backwards!) or on the right-hand breast pocket of uniforms.
(Picture at left by courtesy of liveauctioner)

Very common are also some other ones from several makers on which several German names were engraved like U-Boot (submarine), LEICA (camera manufacturer), KRUPP (Steel works) and FÜHRER (i.e. 'the guide', Hitler's unofficial but widely used titel). Generally, the letters D.R.P. (see Miscellaneous/Terminology/Abbr.) are also printed for more genuineness... 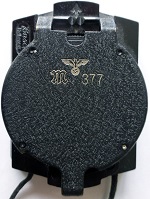 A genuine Busch marching compass also bears the state's emblem (eagle and nazi cross) but in addition the special upper case M of the Kriegsmarine and a pattern number like on ships compasses that makes no sense on such an instrument. However, this item is maybe not a fake: look at the perfect eagle's claws (missing on the Bézard compass above). It can have been made as a gift for a captain but we have no records of such habits.
(Picture at left by courtesy of G. Creis)

The website Forum Axis History gives a detailed explanation why a certain compasss (see pics below) is a gross fake. Even the famous words Alles für Deutschland (link to pic of a SS knife) menaing 'everything for Germany' contain a typo: the letter 'L' is missing in the word DEUTSCHLAND.
All these items are worthless. The nazi symbols were only utilized on stamps and official documents, on uniforms and flags and for aircraft identification but never on tools and instruments. These words are to be seen on a bell hanging in Herxheim's church (© Uwe Anspach/DPA).
For the rest, only ship compasses of the Kriegsmarine bore the state's symbols.

So please, save your money or make a donation to COMPASSIPEDIA.

BION or BUTTERFIELD  SUNDIAL TYPES REPLICAS
Several major museums have confirmed that reproductions are known. These are in the best case only worthless gift shop items and not original antique artefacts.
They can easily be recognized by the machine-tool engraving of the figures and the modern compass. Send us pictures if you are unsure.
Moreover, items bearing the name Nicholas DION are being offered. This is not a double typo: this maker never existed.
One item below engraved Johan Schrettegger in Augsburg was not made by  Johann Nepomuk Schrettegger (1764–1843). This maker did exist but he only made the Augsburg type equinoctial sundial in the late 18th century. His instruments were all engraved by hand and not machine-tooled.

Replica of a Chinese sundial probably made in India by an artist (forger?) who didn't master Chinese calligraphy. The wooden boards are also in too good condition to be antique.