Makeshift Device of a French Army Captain
Compass capsule concealed inside a pocket watch case. The watch is only a mock-up made of a dial and hands soldered inside the crystal frame but without any clock mechanism. The hands can't rotate. The crown rotates freely. It's only a push-button giving way to the compass visible under the snap lid. The compass is stuck inside a wooden frame. Its owner had the lid engraved —probably after the war— with his name and the number of the Stalag*  he had been emprisoned. If it was made inside a camp, the maker must have had access a good workshop.
* German abbrev. for Stammlager i.e. prisoners camp for soldiers and petty officers
See also the section Watches.

During World War Two, the Department 9 of the British Directorate of Military Intelligence (M.I.9 - Escaped British Prisoners of War/POW, Debriefing, Escape and Evasion) developed a great number of secret means to conceal tools and instruments in harmless looking objects for everyday use. The means the pilots carried with them during the air raid were called pre-capture. These comprised many items like uniforms or shoes, that could easily be converted in civilian plain clothes but also see saws, food, etc. This department also sent to the POW's in the Offizierslager, short Offlagpost-capture).
About one in 5 parcel contained such materiel concealed in tooth-brushes, pencils, playing cards, etc. The "empty" ones were called dove and the "hot" ones naughty. You could buy imitations in the Imperial War Museum (but this link is now dead...)

Operation Escape Gadget
The mastermind behind the invention and production planning of these gadgets wrote his story in Official Secret, Clayton Hutton, 1961. A short description of most items can be found in an internal report established in 1942 (Per Ardua Libertas i.e. to Freedom through difficulties). Visit also the website Paratrooper.

A very good article about the compasses (The Art of Escape and Evasion in WWII - Esc. & Ev. Tools of World War Two) written by Phil Froom was published in The Armourer in 2001-2002 (Iss. 46-50, copies of text alone w/o pics available, ask the Curator).
Picture at left: A water-bottle containing food, pills, a watch and a compass - (Click on image for enlarged view)

We describe here only the orienteering aids like maps and compasses (see also the website Florizel for good colour pictures of silk maps).

The different types of escape compasses could be:
1. A small compass (in one piece) that was concealed in the hollow-out heel of a flying boot (see picture 1).
2. One that formed the bottom half of a standard RAF Brass Button for a no. 1 uniform (see note).
This button had a screw top with a reverse thread (i.e. unscrewed by turning clockwise - see picture 2).
There were several manufacturers of these buttons: B'Ham Buttons Ltd., FIRMIN and J. R. Gaunt. The first one used smaller compasses which left a space between the rim and the compass.
Nowadays, many fakes are being offered, BEWARE!
3. A compass consisting of 2 trouser fly buttons: the lower one had a pivot and the upper one was magnetised.
4. A button made of bakelite with a magnetic element in it.
5. A compass concealed in the belt buckle.
6. A razor blade type used by sailors of the Royal Navy.
7. The magnetised tags of the flying boots' laces.
NOTE: The R.A.F. No. 1 (Home Dress) uniform was for parades and smart occasions; it comprised a belted jacket with brass buttons for breast and patch pockets, and a brass buckle for the belt. Strangely, this was used by both bomber and fighter air crews in the early part of the war. It was later replaced by battledress (No. 2 dress) that had a waisted jacket that buttoned on to the back of the trousers, and had black plastic buttons. The escape compass for battledress was hidden in 2 buttons (i.e. it had no crystal); one for the base and pivot, and the other had the needle. Airmen and aircrew serving in hot climates had KD uniforms with black buttons and belts. No. 5 Dress was the Mess Kit.

The above mentioned website THE PARACHUTIST writes about this device: "Early RAF uniform blouses used a toothed buckle for securing the belt section on the bottom of the blouse. (...) The buckle was made of a non-ferrous metal. The compass element was an arrow shaped piece of magnetized material concealed on the back portion of the buckle. The compass pivot was staked on a small swivel joint and when not in use was folded flat against a cross bar. The compass portion was stored on the opposite side of the same cross bar. A slider mounted on the same cross bar retains both the pivot pin and the compass needle assembly. To use as a compass, the slider is moved to release the compass element and the pivots swung to a vertical position. The buckle is placed on a stable horizontal surface and the compass needle assembly placed on the pivot. The pointed end of the compass points toward the North Magnetic pole".

(Pictures of prints: Per Ardua Libertas)

U.S.A.F. escape compasses?
(Picture at left courtesy Doug Rulon)
A visitor sent us this picture together with the following information:
"My grandfather gave me these before he died in 1990. He was in the 8th Army Air Force in 1944. He said he kept them between his toes. I'm pretty sure he said they were tiny compasses. They have a needle pivot on the inside, and a threaded bolt on the other side." This could be a compass case like the one displayed above (fountain-pen) but w/o the magnetic needle/card. The screw being maybe intended to fix it inside the filler.
Can anyone confirm this and give more information?

HONG KONG EVACUATION AFTER THE JAPS ATTACKED IN 1941 - JUST A HOAX? 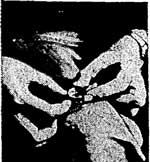 After the Japanese attacked Hong Kong in 1941, the pilots of the China National Aviation Corporation made many flying trips back and forth, evacuating refugees from HK to the safety of Chongqing. One of the pilots, Captain Hugh Chen, was obliged to make his evacuation in a derelict old Vultee that was scarcely airworthy and had been stripped of most of its instrumentation. After he took off, the few remaining instruments ceased to function, but even though it was dark and he was helpless, it was too dangerous to return to Hong Kong. Suddenly he remembered a small 10-cent compass he had in his pocket, and it was this that he used to fly 700 miles into the heart of China! At least, this is how the story was reported in the Daily News, Jan. 1, 1942 (pdf).
(Pics and text sent by P. Gully).

Comments from pilots: A hand-held compass, surrounded by the metal and electrical systems in an aircraft compass, simply will not work. The other thing is that small warplanes in WW2 had propeller engines directly in front of the cockpit, which would have driven a compass just 1.5 metres or less away, completely wild. It's a challenge to fly an a/c on an accurate heading using only the calibrated, high quality magnetic compass, with crosswinds etc…. 700 miles at night across unknown territory, without visual reference to the land below, even with a high quality magnetic compass, would be impossible… but with a toy*?  No… it's a hoax :-)
*  See ads for toy compasses