This department displays compasses for religious and esoteric use. We will try to describe their aim and use.
Please be patient - or ... help us and send us your own inputs if you want to participate in this project. Many thanks in advance.

Magnetism as discovered by the ancient Chinese is being described in many books, especially in The riddle of the compass, by Amir D. Aczel, 2001.
They used it mainly for divinatory purposes. They traveled mainly on rivers where a compass is not required. Even if sailors used a compass to navigate far away from the coast, this knowledge was kept secret since it gave their possessors an edge over the competition. As far as we know they mastered the technique since the begining of our time era. Unfornately, as it happened many times at several places in the world, the catholic church organized the destruction of many archives and the technical and historical information was not conveyed to us.


The various ways of dividing the horizon circle

Depending on the context, the Chinese (and the Japanese?) have used various systems of dividing the horizon surrounding them.
In the ancient Chinese astronomy, the cardinal points were described by symbolic animals and colours:
- North: black turtle
- East: blue dragon
- South: red bird
- West: white tiger

The positions between these four main cardinals were designated by the combined names.
Example: Toung nan = South-East. These eight directions were also replaced by the eight trigrammes called kwa (see below astrological compass or Luo pan)

Description of the sundial panel and the compass's surrounding area based on the explanation given in J. Klaproth's famous booklet Lettre à M. le Baron A. de Humboldt, 1834 (online HERE):
- The Adjustable Panel (sundial):
Above the gnomon: one illegible character; below the gnomon, the sign "bei" (north) and three concentric circles :
- The Compass's surrounding Area (three concentric circles):

Description The compass has a grey metal base on which the meridian line is marked. It has a steel needle, reddened at its South end, and is covered by a glass plate, held in place by a black ring. Beneath the hour-plate is a toothed ratchet scale with 13 divisions, marked in black. A brass strut attached to the back of the hour-plate is set in this scale to position the hour-plate. The front has an hour scale for Chinese hours. Two red characters within this scale indicate that the compass should be turned to the North. There is a brass rod gnomon that folds flat when not in use, to be set perpendicular to the hour-plate. On the reverse side of the dial are nine Chinese characters (three in red) giving the name of the maker and the area from which he came.

Wherever they are in the world, Muslims must turn to their Holy City (Mecca, Saudi Arabia) for their ritual prayers.  This direction is called the  qibla and is represented in  mosques by a niche in a wall called the mihrab. The compasses described thereafter show the right direction.

The Arabs had already been using compasses to this aim in the 13th century, i.e. before the crusades, and this knowledge was transmitted to the West about at this time. For more information read TWO EARLY ARABIC SOURCES ON THE MAGNETIC COMPASS (full text available, pdf).
The German Institute for History of Arab-Islamic Science (Institut für die Geschichte der arabisch-islamischen Wissenschaften) in Frankfurt/M. displays in its virtual museum reproductions of ancient compasses cited in the above-mentioned document. For pictures of al-Ashraf Umar's compass, click first HERE, then select Museum, then "8 - Nautik".

This item looks like a Butterfield-type sundial but features no hours chapter on which the shadow of the animal-shaped gnomon would point. Moreover, zodiac signs engraved in a circle on the face suggest it was rather intended for an astrological use or to find the Qibla. A freely rotating pointer is attached at the center of the face where the gnomon rotates. 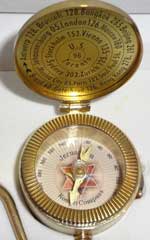 Compass working like the ones above but indicating the direction of Jerusalem.

Description : This instrument was most probably used for spiritualism. When the medium holds the electrode at the end of the wire and the pendulum is hanging over a photograph (for example) of a beloved person, the magnetic needle points then towards a direction corresponding to the feelings of the person on the photograph. The indicated values are the same as on the postcard, i.e. cool in the North but hot in the South. By placing a magnet under the table and the photograph accordingly on the table, you can achieve very good results...